Our Feature in the latest OnTap Magazine (Winter Edition 2018)

OnTap Magazine has featured an article about our 2017 bike trip down Africa. Where we got to share our story about not only cycling all that way... but also tasting all those refreshing beers! 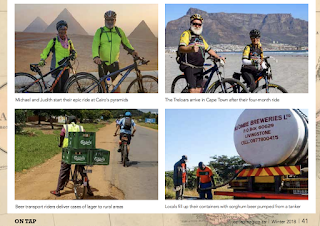 Get yourself an electronic copy via their website, or a hardcopy via subscription, in most South African airport lounges, or at your local South African craft brewery and homebrew supply stores.

Hope you enjoy it. 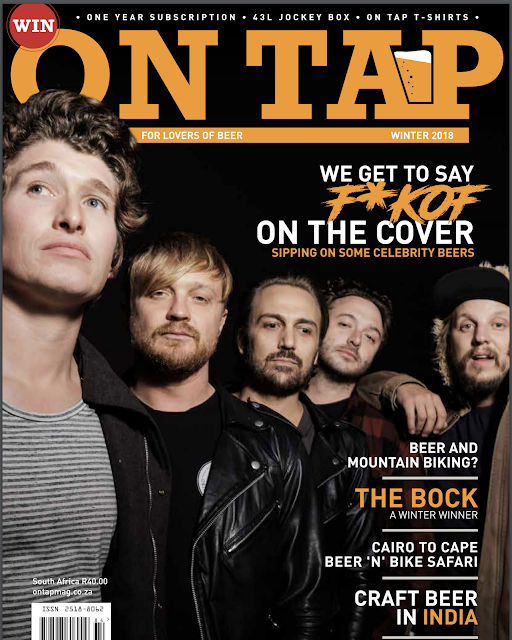 Malmesbury to Cape Town (80 km) - Final Stage of the TDA

So, after my tablet which I'd been using to write and send out my blogs, had decided to stop working a few weeks before ending our TDA tour, and coupled with poor connectivity (especially in Namibia) my daily blogs suffered (as I am sure you all noticed) and so you have all had to endure late after-the-fact accounts of each day's ride... And if you haven't noticed... I have been putting a few out on "the interwebs" every so often now that we are back in Prince Albert.

Now, as far as the TDA chapter of the blog goes, we have finally arrived at the very last TDA Stage after 4-months of cycling. Thank you to everyone for your amazing show of support and for reading along thus far. It is much appreciated, and even a tad overwhelming to think that so many of you were interested in our bucket-list journey from Cairo to Cape Town.

As it sits right now, we have have 19'862 visits to the Treloar Herald blog, and so I hope that there are at least a handful of newly-inspired souls among those nearly 20-thousand visitors!

Life is short. Don't sweat the small stuff. Get out & live your bucket list.


The "Final Count Down", the day we had been riding towards for these last four months had finally arrived, but also a day of very mixed emotions. Happy to be at our destination, happy to see family and friends again, but very sad that it had all come to an abrupt end. Packed up our tents for the last time and readied ourselves for the last ride of the Tour.  Judith and I left Camp relatively early together, as she didn't want to arrive late at the Lunch position, where after lunch, we would form up into a convey and proceed to the finish, escorted by the Cape Town Traffic Police.
On the way to Lunch a group of us had an impromptu photo shoot in our new TDA 2017 Commemorative Cycling Jerseys, with Table Mountain in the background. This was followed by the opening of some small bottles of champagne by Judith and I to mark the memorable occasion.

I rode a leisurely 59km to lunch with Judith and we arrived at the Lunch Truck, which was parked on the beach, within the allotted time period. We were treated to cheese & biscuits and other delightful snacks, accompanied  by sparkling grape juice (no alcohol). Had the first of our official TDA photo sessions, all looking so impressive in our new 15th Anniversary TDA Cycling Jerseys.After lunch, we formed up into a convoy, with Judith placed in the front (no pressure!) and headed off into a headwind for the final 20km ride to the finish at the Lagoon Beach Hotel in Milnerton.

The finish at the Hotel was a bit chaotic, we  crossed the finish line (flag) on the beach, but half the people who were waiting for us and other riders were at the front of the Hotel!  But all's well that ends well, and they came down to greet us once we were in had figured out what was going on.It was fantastic to be met by our family -  our son Kenneth, our daughters Jo-Ann & Mary-Jean,  Judith's Brother Gregg,  Cousins-in-law Jill & her son Craig.  While Friends -
Richard & Denise;  Bruce, Sonja & son Thomas, were also there to welcome us home.There was much joy and jubilation, and the sudden realization that our roller-coaster ride from the top of Africa to the bottom of the continent had come to a sudden and abrupt end. All I could think about, was what were we going to do tomorrow, if not riding our bikes?
Our arrival at the Finish was followed by another official photo shoot, the final one for the day. Then it was time for the presentation of the Tour Medals, first to the Sectional Riders, then the Original (Full) Riders who had all started in Cairo, followed by the Four Riders who obtained EFI Status. These being Alex, Charles, Mark and Liz, only four out of the original twenty seven who started. 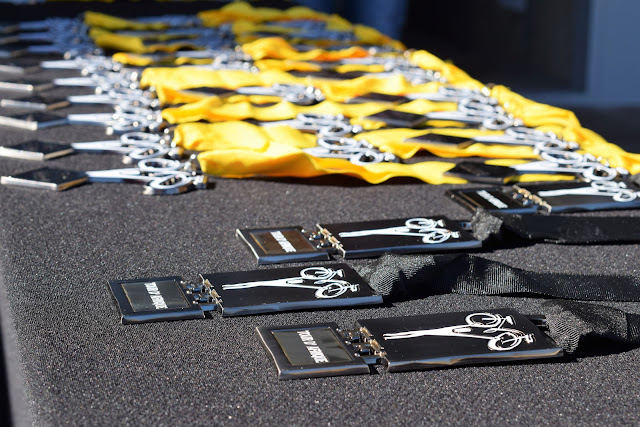 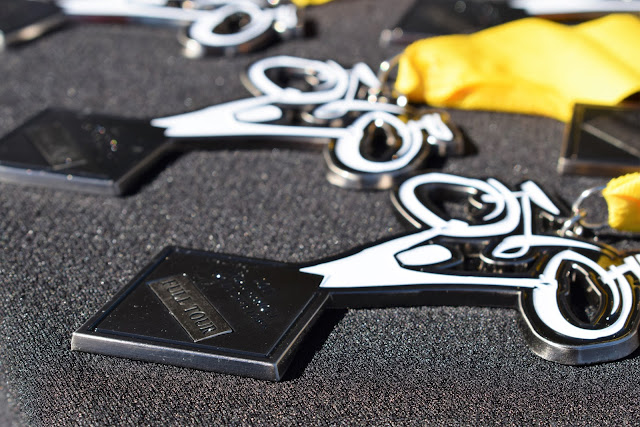 We then spent the rest of the afternoon having quality time with family and friends, as well as some of the other Riders, as the realization of  our achievement finally got to us.


Later that evening we attended the Official TDA Dinner, accompanied by immediate family members, and it was a truly a memorable occasion to mark the completion of the 2017 Tour!

Until the next adventure...
(which may come sooner than you think)
...skip the grapevine, and read it in the Herald!

Woke up to a very cold morning, I decided to cycle the complete day. After all, it was going to be our second last day!

While tomorrow would be a short day (expected to be a bit of an anti-climax).  Judith cycled from the Lunch Truck, so I rode with Mike vd Berg and Philip for most of the way. When we left Camp the temperature was only 3 degrees, it was not going to be a pleasant morning jaunt, and oh how I missed the equatorial temperatures of a few months back!
The day’s route was a mixture of dirt and tar, we started with dirt and finished on tar, with us riding down three mountain passes and only up and over one (Mitchell's Pass) situated between Riebeek-kasteel and Malmesbury, from where we glimpsed our first view of Table Mountain, our ultimate goal.  Although it wasn’t anything spectacular yet, as it was so far away, it was great to see it in the far distance.We arrived at the Town of Ceres, and went off to the Wimpy for a leisurely breakfast, followed later in the day by milkshakes and cake at a Coffee Shop in Riebeek-kasteel (Judith had also stopped at the same Coffee Shop with Anne & Peter). Today we did so much eating and drinking, you would think we were on a culinary expedition and not a cycle tour!
Our final day of camping was situated at the Malmesbury Caravan Park, where we pitched our tent for the last time. Had the riders’ briefing, followed by a formal prize giving, where the TDA Staff presented each rider with a Certificate and their official 2017 TDA Cycling Jersey, which the majority of us would wear on our ride into Cape Town tomorrow.Judith received a Certificate for "The most pedal strokes", while I received one for " The most creative/disturbing use of Vegemite” - which related to my antics as the Royal Baby during the Equator Crossing escapade!
It was a day of many "lasts". It was our last Riders’ Briefing, our last supper, the last time we would be camping and sleeping in our tents; and the last time everyone would be making use of public toilets and public showers again.

Later in the evening - in celebration - Murray, Michael vd Berg and myself, took ourselves off to sample the vibrant Friday night life of Malmesbury, where we circulated and mixed with the locals... Tomorrow would be our last day of the Tour. However that didn’t stop one of us (his name will remain anonymous and yet will be sketched in infamy forever) from liberating some toilet paper at one of the drinking holes we frequented, just in case he needed it on tomorrow’s ride.

Getting back to normality after the Tour finishes tomorrow, is definitely going to take some doing for some of us riders! 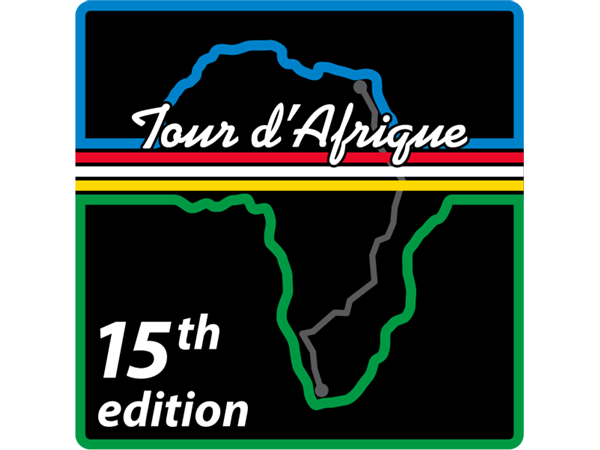